Dancing With The Stars Shocks Everyone – November 2 Results 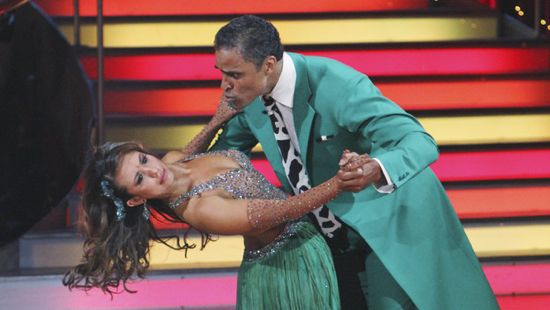 No one saw this one coming.  Or did we?  Going into the results show tonight that showcased the 200th episode of Dancing With The Stars, everyone was saying that Bristol Palin and Mark Ballas would be hitting the road.  Bristol could pull a performance face together last night and left us all wishing for more.

Apparently more of America was with Kelly Osbourne in her high praises of all of Bristol’s work.  Watching the video of Bristol, tearing up, missing her son, made me feel awful.  The poor thing!  Who wouldn’t feel that way.

The musical guests for the night were Taylor Swift (what’s not to love) and the classic, Rod Stewart.  Loved their performances.

By the end of the night, we were saying goodbye to Rick Fox and Cheryl Burke.  It was shocking, but at the same time, if it wasn’t going to be Bristol, Rick was the right one to go.  But hey, Audrina Patridge is gone.  Does that make any sense?  No.  Not so much.

Now that Bristol has been given another week of life on DWTS, I hope that she can pull out some acting skills and out on a really good performance, beyond the footwork.