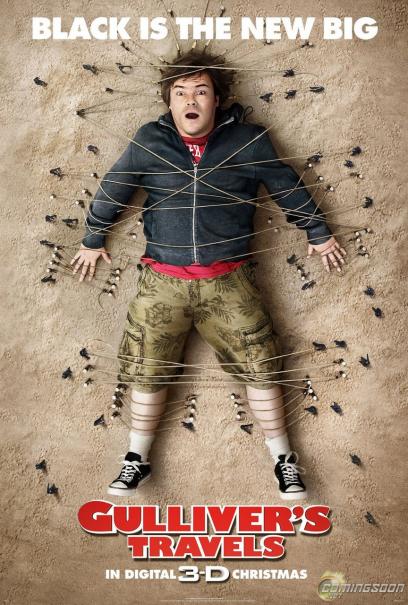 Anything that Jack Black does, I have to see.  Okay, well ‘Year One‘ was just awful.  But aside from that.  I enjoy Jack Black on so many levels.  Have you seen him on Yo Gabba Gabba?  Some of the best comedy I’ve ever seen.  Seriously.  Google it.

Jack’s latest flick is ‘Gulliver’s Travels‘ and it looks great.

Here’s the gist of the movie (in case you live in a cave):

In a contemporary re–imagining of the classic tale, Jack Black stars as Gulliver, a big–talking mailroom clerk who, after he’s mistakenly assigned a travel piece on the Bermuda Triangle, suddenly finds himself a giant among men when he washes ashore on the hidden island of Lilliput, home to a population of very tiny people. At first enslaved by the diminutive and industrious Liliputians, and later declared their hero, Gulliver comes to learn that it’s how big you are on the inside that counts.

Now it’s time for the laughs.  Turn up the volume and watch the trailer below: