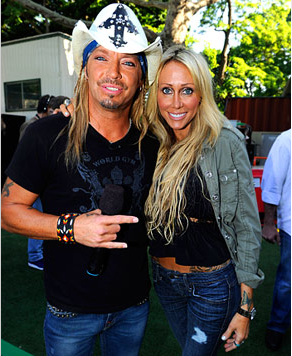 Say it ain’t so!  I love me some Bret Michaels and he’s allowed to be a bad boy.  Just not the kind that does the nasty with married women!  It seemed like it came out of the blue when news of Billy Ray Cyrus filing for divorce from his wife of 17 years, Tish Cyrus.  I mean, the woman just had her name legally changed to Tish Cyrus.  I don’t think she would have gone to those extreme measures if she new a divorce was right around the corner, right?

Sources are telling Us Weekly that Tish and Bret have been dirtying up the sheets and as soon as Billy Ray got wind of it, he headed to the courthouse and filed the papers.  Now, I highly doubt it went that fast.  But man, he’s got to be hurting.  Bret was his “pal” and for his to do that.  Painful. Just painful.

Miley will finally be 18 on the 23rd of this month and she’s pretty much a “grown-up” anyhow.  But, her little sister Noah and brother Braison are going to be affectedly badly by this divorce.  They are both old enough to be very aware of what’s really going down.

The reps for the alleged cheaters are denying the affair.  But things are pointing in that direction and those piles of dirty laundry are hard to deny.

What’s your take?  Would Bret Michaels really stoop that low?