Katherine Heigl is Gorgeous with Naleigh on the Cover of W 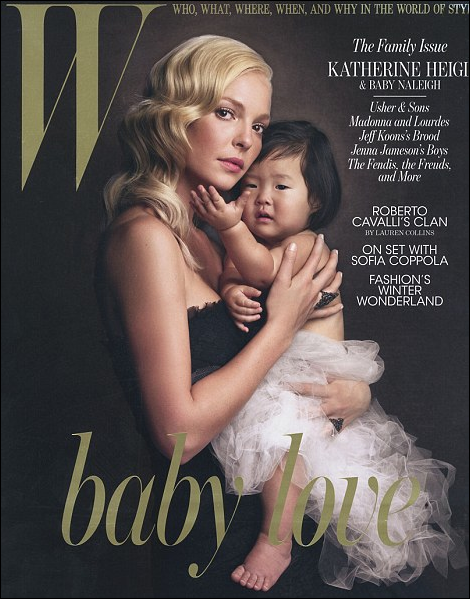 Katherine Heigl has always been one of my most favorite actresses.  She and Gerard Butler in ‘The Ugly Truth‘ are pure comedy with plenty of hot chemistry mixed in.

Anyhow, when Heigl adopted her little princess, Naleigh I was thrilled for her.  Well, for both of them.  Since then, Katherine has had the glow of motherhood and it suits her perfectly.

Naleigh was born in South korea with congenital heart problems that were later corrected through surgery, after Heigl adopted her.  This was just ‘three or four days’ before she started work on ‘Life As we Know It.’  She told W magazine,

“I was about to play a woman who inherits a baby, and I was experiencing the exact same thing.”

No better prep than that I’d say!  You can grab the December issue of W to read the full interview.  Doesn’t she look stunning on the cover?  I love it!