John Mayer and Giada De Laurentiis are Having an Affair?! 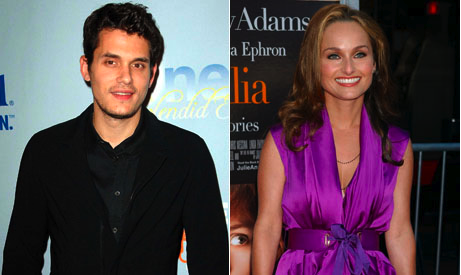 John Mayer is a naughty boy.  But he’s allowed to be.  He’s not married.  His “playboy” reputation precedes him.  When I see headlines involving him with random women, I am never surprised… that is until the headline includes that of a married woman!

Giada De Laurentiis is my favorite pro chef and I adore her show, ‘Giada at Home‘ on the Food Network.  She always includes her husband, Todd Thompson and their daughter in her shows.  She by no means comes across like the cheating type.  But then, do the cheaters every look like cheaters?

Giada and John were seen together at the Boom Boom Room at The Standard hotel in New York City.  An eyewitness said,

“John had one hand on the small of her back.  They looked like two people who were going to go home together.”

After that, they were spotted at Hotel Gansevoort where they went into a suite.  Hmmmmm…… fishy….

“I was at The Standard that night.” But she insists she’s not cooking up trouble with John — and didn’t even see him that night: “I’ve met him and he’s a great guy, but I just like his music. That’s all.”

One of Mayer’s “pals” said,

“This doesn’t surprise me one bit! He’s always talked about how he was into her.”

Well, if this is true, it surprises me a bit.  But I am not going to believe it until I see Giada and Todd split.  Then I will believe the rumors.

Do you think it could be true?