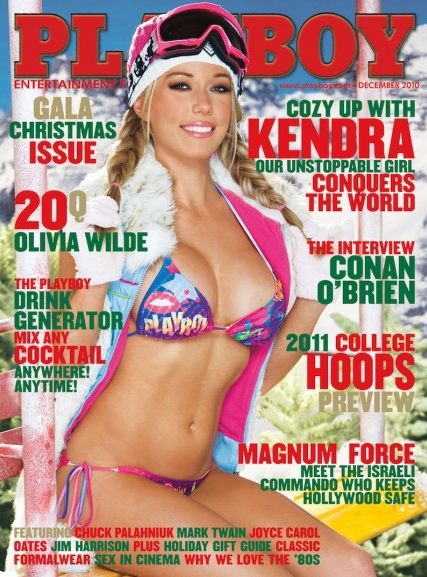 Kendra Wilkinson hasn’t moved on from her Playboy past now that she’s a married woman.  She’s still embracing it.  That’s not some epiphany.  No one really thought she was gong to turn into Susie Homemaker.  But, she for some reason feels that she’s got to defend her latest issue of Playboy,

“Hey guys! So I wanted to clear something up really quick! A lot of you saw on my show that I was struggling to decide whether to pose for Playboy again or not. I AM on the December cover of Playboy but it wasn’t from a recent shoot. The photos are from a shoot I did 2 years ago when I was still living in the mansion. I’m flattered to be on the cover again and as you all know Playboy has a very special place in my heart! I just wanted you guys to know I didn’t recently pose.”

So does this mean that this will be the last Playboy cover we will see her gracing?  Or will Playboy rely on their Kendra Wilkinson archive to put out future issues?  I think that her husband, Hank Baskett is the one she should be talking to, don’t you?