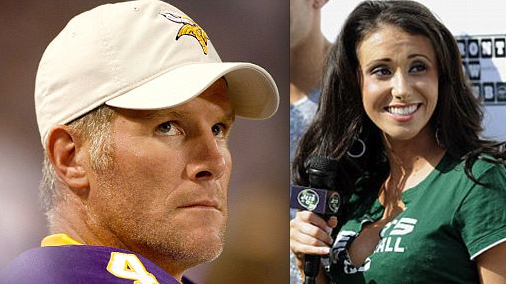 Jenn Sterger met with NFL security for three hours on Thursday (November 11th) at an undisclosed location in New York City to hand over the evidence the NFL investigators have been waiting for.  I wasn’t sure if she was ever going to come forward with it either.  I guess she was waiting for Brett Favre to pay her off, and when he didn’t, she decided to take him down.

Sterger’s manager, Phil Reese expects the NFL to reprimand Brett Favre immediately since they now have “overwhelming evidence” that is sure to incriminate him.

“We expect action swiftly, but it’s in their hands now.”

I think it’s pretty obvious that Brett Favre violated the NFL’s personal conduct policy and will most certainly face suspension for his dirty deeds.  Ben Roethlisberger was suspended for what ended up being four games, and there was no concrete evidence of anything.  Favre has a pile of black and white evidence that even he won’t be able to deny any longer.