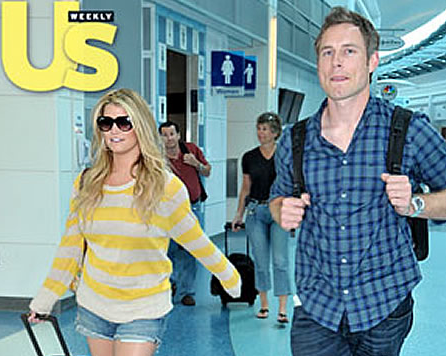 Oh my word.  It’s not even February and the engagements are coming out of the woodwork! Jessica Simpson and her NFL boyfriend, Eric Johnson who just came out of a divorce are officially engaged.  Jessica’s ex-husband, Nick Lachey just announced his engagement to Vanessa Minnillo a few days ago.

Is this some sort of crazy competition?  I know that Jessica has been desperate to be in a committed relationship since she and Nick split.  Rumor has is that Jessica’s friends don’t like Eric and they think he’s just using her for the fame and fortune side of things.  Could that be true?  Is Jess so wrapped up in her puppy love ways that she can’t see what’s really going on?  Or is Eric actually the right guy for her?

Jessica flashed her ring at a Dillard’s in the Oak Park Mall in Kansas City.  They have only been together since May and Eric has only been legally divorced for a few weeks.  How do you think this is all going to work out?