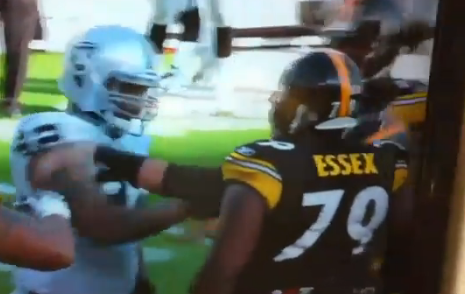 During a very heated matchup between the Pittsburgh Steelers and the Oakland Raiders, in true thug fashion, Richard Seymour got pissed after Big Ben completed a 22-yard throw to Emmanuel Sanders that resulted in a touchdown.  So while Ben was celebrating in perfectly acceptable fashion, Seymour punch Roethlisberger in the face and ended up being ejected after much confusion amongst the less than up to par officials.

I have to say that was one of the worst officiating jobs i have ever seen.  I don’t care what teams are playing or who you are a fan of.  That was not a good round of calls.  The Steelers set a franchise record for most penalty yards, ever.

All this crap about “protecting the quarterbacks” and then this?

You can check out the videos below and see what a schmuck Seymour was.  He should get a massive fine and be suspended for at least one game.