Jason Trawick Knocked Up Britney Spears Then BEAT Her Up 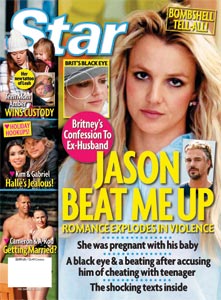 Britney Spears is facing another major bump in her “road.” Star magazine is reporting a pretty brutal report that her current boyfriend, Jason Trawick is beating her.  How did this come out?  You would never guess!  Britney’s ex-husband of like five minutes (55 hours), Jason Alexander, gave Star the story.  He secretly taped their conversation, I guess to keep the evidence….

“Britney is in an abusive relationship.  She told me her life had turned into a nightmare.”

Britney told Jason Alexander  that  Trawick “hit her so hard it gave her a black eye.  She said she couldn’t even leave the house for a week because of the bruising.”

In the secretly recorded tape, Jason says, “I thought he proposed to you or something at the beach.”

Britney responds, “Before or after he beat on me.  My dad has a shotgun and he’s just waiting to use it.”

He also said that Britney was pregnant with Trawick’s baby earlier this year!  Did she have a miscarriage?  What happened?!  Alexander is”really concerned” for Britney and that’s why he’s sharing all of this really heavy, personal stuff.  He believes that Britney is “telling me these secrets as a way of getting out of this.”

Wow.  I don’t see why this guy would make this up.  Why now?  Is Jason Trawick really a monster?  This is going to be very interesting!