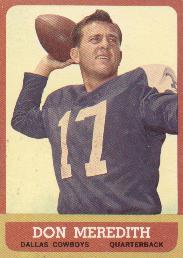 Monday Night Football legend Joseph Don “Dandy Don” Meredith died yesterday at the age of 72.  He suffered a brain hemorrhage and slipped into a coma.

Don Meredith played quarterback for the Dallas Cowboys in the ’60s and then joined Keith Jackson and Howard Cosell for the Monday Night Football broadcast booth in 1971.

His wife said a private ceremony will be held at his burial site in Santa Fe, New Mexico.