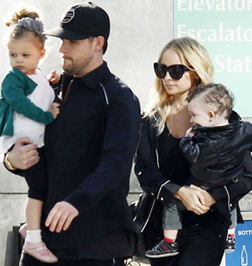 Nicole Richie and Joel Madden are finally going to be tying the knot on Saturday at her daddy, Lionel Richie’s house.  This is going to be a pretty small gathering, keeping it personal and intimate.

The guest list isn’t very long.  But, there are a couple of surprises on it.  Samantha Ronson will be in attendance.  Christina Aguilera will be their as a guest as well as to sing for the bride and groom.

Paris Hilton did not make the list?  What’s that about?  Did Paris not want to be there?  Or was it Nicole who wanted Paris out of the picture?  I know they’ve had their differences over the years, but this is a wedding and that is usually the ‘exception to the rule’ right?

Either way, I am excited fro Nicole and Joel. She’s going to be a beautiful bride.  Harlow and Sparrow will be the cutest ring bearer and flower girl ever.