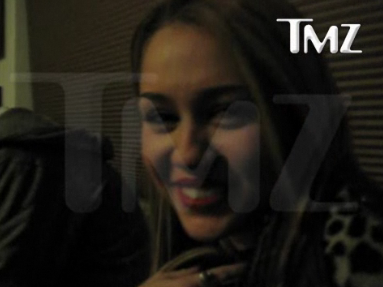 Watch out world, Miley Cyrus is 18 and she still partying it up. This time the party includes a bong.  Yep.  Miley hits a bong and then gets the giggles soooo bad.  It’s hilarious.  The video below was shot at her house in L.A. five days after her 18th birthday.

Her “pal” shot the video and sources say someone stole it.  Hmmmm, that’s suspicious.  Nice “friend.”  A source is also saying that Miley wasn’t smoking weed, but a drug called salvia.  Ewww!  It  has psychedelic qualities. Possession of salvia is legal in California.  Interesting.

All I know is that if she giggling like that and if saliva has the same munchies affect like weed, Miley needed a lot more than that box of frosted flakes you can see in the background.