Why Did Mark Madoff Kill Himself? 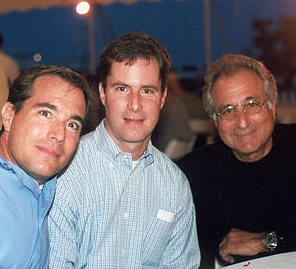 Mark Madoff, son of Bernie Madoff was found dead in his SoHo apartment by his father-in-law this morning.  His 2-year-old child was also in the apartment at the time and that fact alone horrifies me.

Mark Madoff, was never charged with any crimes relating to his father’s Ponzi scandal, but he obviously couldn’t take all the “dirt” that came with being Bernie’s son.

An attorney for Mark Madoff released a statement saying,

“This is a terrible and unnecessary tragedy. Mark was an innocent victim of his father’s monstrous crime who succumbed to two years of unrelenting pressure from false accusations and innuendo.”

Today marks the two-year anniversary of Bernie Madoff’s arrest and from the looks of it, was Mark Madoff’s breaking point.  What a sad ending.  This has got to be eating up Bernie Madoff in prison.  And it should.