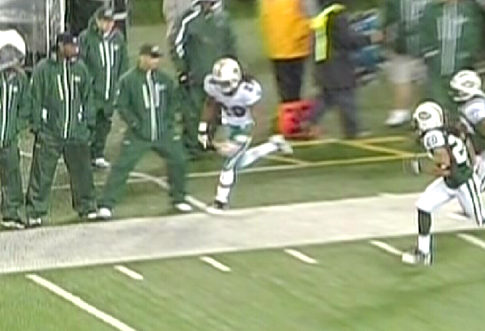 We might just have the witnessed the biggest act of stupidity in the sports world ever.  Miami Dolphins cornerback Nolan Carroll was tripped by the New York Jets‘ strength and conditioning coach, Sal Alosi on the sideline while covering a punt in the third quarter of Miami’s 10-6 victory Sunday.

“I made a mistake that showed a total lapse in judgment,” Alosi said in a statement released by the Jets about 2 1/2 hours after the game. “My conduct was inexcusable and unsportsmanlike and does not reflect what this organization stands for.”

Talk about douche bag.  He’s lucky that Nolan Carroll wasn’t seriously injured.  Can you imagine?  If he’s not fired, the Jets are out of their minds.