Denise Richards and Nikki Sixx Are Together! 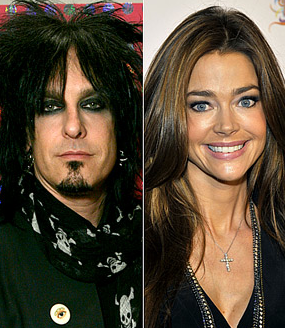 Denise Richards has a new man and he’s the last guy I would have ever pictured her with.  Motley Crue’s bassist, Nikki Sixx has won her over and they are an official item.

A source says they “have been neighbors for years. They have a lot in common and are taking things slowly.”

They are already going public though.  They had breakfast at Marmalade Cafe in Calabasas, California on Sunday morning.

“Nikki was telling stories, and Denise was laughing,” says a witness.

So what happens when it doesn’t work out?  Does someone have to move?  I’m just saying… Denise doesn’t have the best track record.  Richie Sambora, Charlie Sheen, now Nikki Sixx.

How long do you think this will last?