Justin Bieber Breaks Up Cat Fight, Then Gets The Giggles – VIDEO 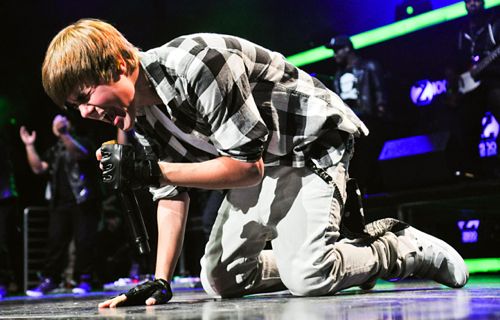 Justin Bieber was performing in Pittsburgh, when he threw a Steelers’ Terrible Towel into the audience in front of the stage.  The girls were shrieking, then they started fighting over it.  So, Bieber stopped singing Baby to break up the fight.

“Don’t fight over it — someone’s going to get hurt.”

He then chose the girl who got the towel.  He started the song over, but then had an attack of the giggles and had to start again.  Even then, on his third attempt, Bieber really couldn’t compose himself.

I think he was struck by how insane his fans really are, fighting over a Terrible Towel, instead of watching him perform.