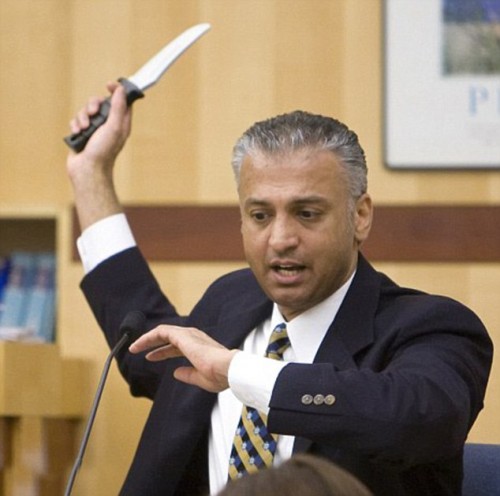 40 Year Old Virgin star, Shelley Malil has been officially sentenced for the the attempted murder of his ex, Kendra Beebe.  Two years ago, he went to her house to pick up some of his belongings and found another guy there with her, so he grabbed a kitchen knife and stabbed her 23 times.  Yeah, that’s not scary…..

Thankfully she survived and was able to testify against him.

“I stand before the defendant alive,” Beebe testified. “Despite plunging a knife in me 23 times and trying to kill me, I am alive. Despite the wicked scars he left on my body, I am alive.”

“That night, the defendant was a monster.  She didn’t deserve this, but I am so grateful that I can hug her.”

Malil’s sentencing left him “at a loss for words.”  ”

I failed miserably, not only as a human being, but as a father, son, uncle, brother, friend,” he said. “What I did to Kendra – I don’t have the words to express my remorse.”

Malil has been given life in prison without a chance for parole for at least 12 years.  Do you think the punishment fits the crime?