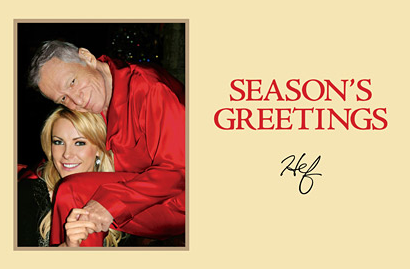 Hugh Hefner (84) is officially engaged to Crystal Harris (24).  The news came out on Twitter of course, where else would we get such exciting, breaking news, right?

“When I gave Crystal the ring, she burst into .  This is the happiest Christmas weekend in memory…I got what I was hoping for for Christmas…Crystal’s love.  Yes, the ring I gave Crystal is an engagement ring. I didn’t mean to make a mystery out of it. A very merry Christmas to all.”

Crystal is going to be Hef’s third wife.  He’s got two kids ages 58 and 55 from his first marriage.  Then two more kids ages 9 amd 10 from his second marriage.  That divorce was finalized last year.

I’m not one to call out an age difference…. but this one is a bit much.  Seriously.  60 years is too much.  Gross.  Boning someone your grandfather’s age is just wrong.