Brett Favre Being Fined NOT Suspended for Sexting Jenn Sterger 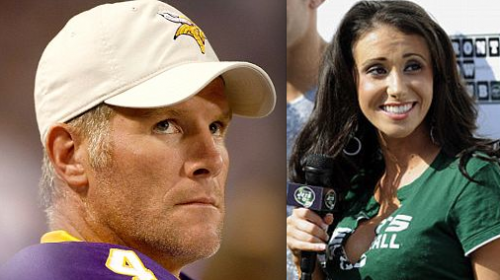 NFL Commissioner Roger Goodell will be announcing his disciplinary action against Brett Favre for sending pictures of his dong and other sexting type texts and voicemails to Jenn Sterger within the next 24 hours.

Sooooo what does this mean?  The NFL has found Brett guilty.  Okay, so why is he only going to face a small fine?  Sources say he won’t get more than a $50,000 fine for his actions.  Sure, the Vikings only have one game left against the Lions next week and they are out of playoff contention…. but the principle of the matter says that Favre should be suspended, I don’t care if it’s only one game.

Players are fined huge all the time for questionable hits in the game of football.  James Harrison (Pittsburgh) was fined $75,000 for a hit earlier this year and you’re telling me that Brett Favre is only going to pay maybe 50k?  That is clearly wrong.  And then how about Roethlisberger being suspended for “inappropriate” behavior that he was never actually convicted of?  Jenn Sterger has a pile of evidence that convicts Favre.  I am so sick of the NFL having an “affair” of sorts with Brett Favre.  It’s disgusting.

I hope that Jenn Sterger holds true to her promise to go after Favre if the NFL didn’t suspend him.

UPDATE: As predicted, Brett Favre is only being fined 50k for “not cooperating” with the NFL investigation. Give. Me. A. Break.