Hold the Presses! Billy Ray and Tish Cyrus Are Back Together! 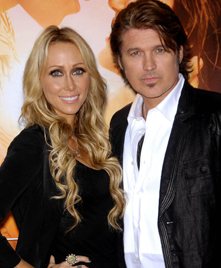 Billy Ray Cyrus filed for divorce from Tish Cyrus on October 26th.  But now it looks like they are mending their fences.

Yesterday they were photographed having lunch together at the P.F. Chang’s restaurant in Nashville.  Source say they were very happy and left the restaurant all smiles.

Other sources reported that,

“Billy Ray and Tish have been spending a lot of time together because of the kids.  Just after the split, they were screaming mad at each other. But now they’ve mellowed and are reaching an understanding.  Miley has really been pushing them to reconsider and give their marriage another shot.”

So maybe the rumors that Tish cheated with Bret Michaels were just that…. rumors.  I actually hope that they are working it out.  The kids are young and need their parents together.  Crossing my fingers for a Happy New Year for the Cyrus family.