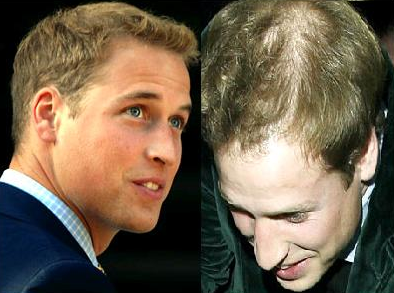 Embarrassing anyone?  Geez.  Rogaine is calling out Prince William on his balding head!  But they are doing it out of the goodness of their hearts, right?

A rep for the company tells Life & Style,

“We’ve been watching Prince William’s growing bald spot closely for years, and we believe Rogaine can help.  We’d love to send him our new Unscented Men’s Rogaine Foam. William would be the perfect spokesman for Rogaine because whether you’re a prince or an average Joe, hereditary hair loss affects one in four men.  When he’s on the altar and the world is looking at the back of his head,” says the rep, “he won’t have to worry about the hair that’s not there.”

I kind of don’t think he was worried about it at all.  He’s been in the public eye for a long time and always has cameras snapping him.  He might grow a complex now though…..