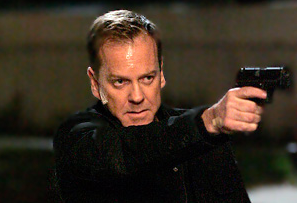 That is kind of a shocker.  Fox doesn’t want to do the ‘24‘ movie?  WTH?  I am very disappointed.  I am not worried though, I know that someone else will pick up the script, it’s just going to take longer for that to happen now.

The dude who wrote the script is Billy Ray…. not Cyrus… the one who wrote State of Play.  The series executive producer Howard Gordon said,

“As far as I know, it is in suspended animation.  There is talk about re-approaching it. I understand (director) Tony Scott is meeting with Kiefer [Sutherland] to talk about ideas. People are still talking about it.  I was disappointed [Fox] passed on the script but I’m certainly hopeful that the movie will get made at some point.  Anecdotally, I’ve heard from people who are really missing the show and I do think there is more life in Jack Bauer.”

Um yeah!  There is a TON of life left in Jack Bauer and I’d go to 10 movies as would all the other ’24’ fans.  So let’s make this happen!  We NEED a movie!  I am already going through major withdrawals here!  It’s January, I am ready for my ’24’ fix!