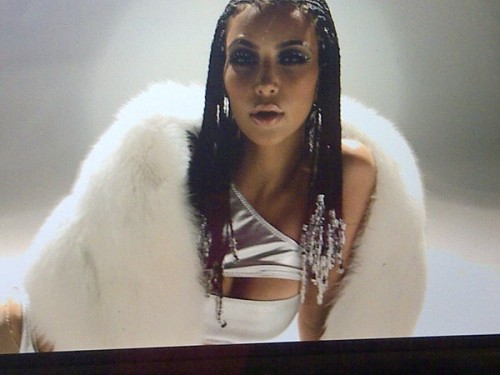 Kim Kardashian is ready to take on the music world and you know she’s going to do it “by storm” because that’s what this girl does.

She shot her first video with The Dream and even has my least favorite guy, Kanye West on board with her for it!  Miss Kim hosted New Year’s Eve at Tao down in Las Vegas and she took the opportunity to introduce her first single to the huge crowd around 1 am.

She had already started teasing us via her Twitter with the shots (below) of her music video, Tweeting:

“2011 is all about trying new things and going for it! I’m starting mine w something fun and crazy! Sneak peaks coming soon!”

She had a blast at the party, dancing the night away and partying with her brother, Rob Kardashian and her pal, Brittny Gastineau among many others.

You can check out Kim’s first single below… it’s not the best video ever, but it’s a good sneak peak at what she’s got lined up for her full length album.

Love it or hate it?