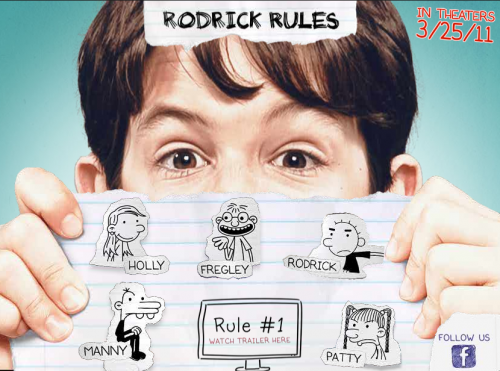 It all started will the super popular books, now the movies are contagiously funny.  Let me just say that Diary of a Wimpy Kid movies aren’t just for the kids.  Adults of all shapes, ages, and sizes will be cracking up….. I promise.

In this sequel to 2010’s surprise hit, Greg Heffley, the kid who made “wimpy” cool is back in an all-new family comedy based on the best-selling follow-up novel by Jeff Kinney. (Kinney’s “Wimpy Kid” series has thus far sold 42 million books.) As he begins seventh grade, Greg and his older brother – and chief tormentor – Rodrick must deal with their parents’ misguided attempts to have them bond.

Now check out the trailer and enjoy…..

Diary of a Wimpy Kid 2: Rodrick Rules opens in theaters on March 25th.