Jane Krakowski Shows Off Baby Bump at the Beach 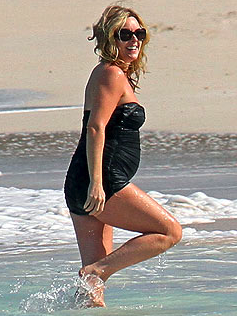 30 Rock star Jane Krakowski is engaged…. but she’s pregnant too?  She and her fiance Robert Godley might have some other news to announce after the photo above gets around!

They are on a holiday in the Caribbean and haven’t commented on the speculation yet.  Could that bump be anything but a baby?  What do you think?

“Jane and Robert are indeed expecting a baby,” the actress’s rep confirms. “Both soon-to-be first-time parents could not be happier!”