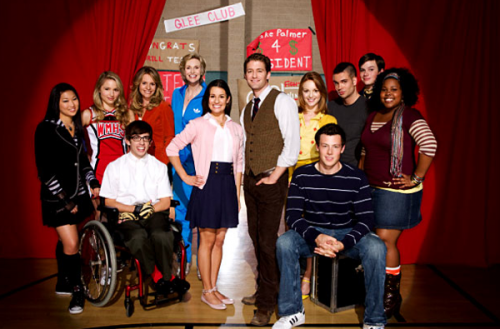 Glee loves Lady Gaga and they are bringing the Gleeks another round of her freshest music.  Born This Way is going to be featured on the show in the spring.

Glee co-creator Ryan Murphy told EW that Gaga’s Born this Way March or April.  This episode will focus on Dave Karofsky (Max Adler), whose bullying drove Kurt Hummel (Chris Colfer) to transfer schools during the first half of the season.

“I love that that song is [an] anthem.  This show is by nature optimistic and I think a character like Karofsky could turn to booze or pills or alcohol and kill themselves or do something dark. But I also love Max and I love that character and I sorta want that character to have a happy ending. So I don’t really know what that’s going to be, but I do know we’re going to do a whole episode that’s about that song.”

Sounds good to me!  We will get to hear Gaga’s Born This Way next month ….. so you’ll have it memorized before it lands on Glee.