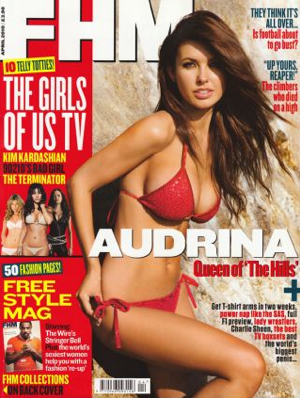 My favorite girl from The Hills, Audrina Patridge is covering FHM Australia and is also the June girl for the free calendar. What’s not to love?  Audrina is arguably one of Hollywood’s hottest females.

Here is some of the chit chat Audrina had with the mag:

So, come on Audrina, how much of The Hills is fake?
I get this question a lot. It’s very manipulative and very guided. They tell us, “Okay, you’re filming Thursday night at this club at this time, so show up.” And you don’t really know who is going to be there, or what they’re up to, so you show up and last season Kristin would be there wanting to fight me. And you’d try and have a good time, and I would be like, “I don’t want to fight you,” and just leave.

Did you mind being filmed in a bikini?
I was always at the beach when I was growing up, so when I came to Hollywood I didn’t think anything of it. Other girls I know are self-conscious about their body but I’m really not. I don’t think about my flaws or that there are guys looking at me.

Would you do nude scenes?
If I was passionate about the script and the scene was there in order to make the character believable then I would do it. If it was just a flash of a booty here and a bit of boob there then fine, but anything too intense and I probably wouldn’t do it.

We’ve started the voting for FHM’s 100 Sexiest Women In The World. Who would you like to be number one?
I love Mila Kunis, she’s very exotic looking. She did a spoof of me on the Funny Or Die website. We do voiceovers at the same place in LA and I ran into her and we just busted up laughing. She was apologizing and I was like, “I don’t care! I thought it was the funniest thing ever. I’m glad they got you to play me.”