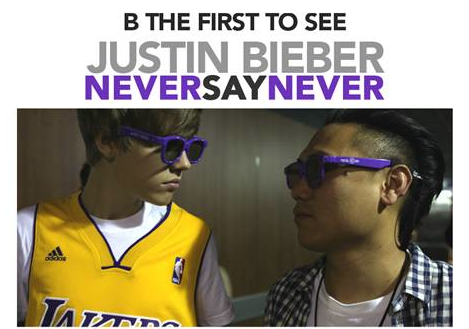 Justin Bieber fans, the countdown is on!  In less than a month, Justin Bieber Never Say Never 3D lands in theaters!  This is your chance to be a VIP and see it before the rest of the planet!

Be among the first in your city to see the new movie before it opens nationwide! Don’t miss this exclusive advance movie screening event just for Justin fans! Ticket price includes sneak preview of film (Feb. 9 @ 6pm only!) and official movie merchandise including purple 3D glasses from RealD.

You can purchase your VIP package HERE for only $30 and give all of your friends something to be VERY jealous of!

What are you waiting for?  Get yours before the limited number of VIPs are sold out!