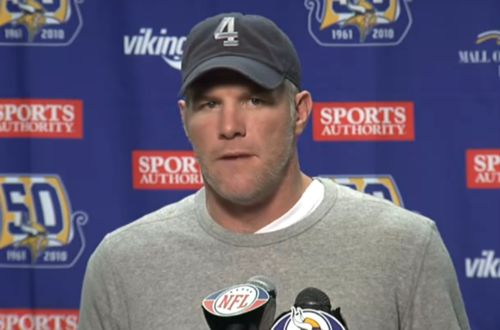 Brett Favre is now the former Minnesota Vikings quarterback.  He officially filed his retirement papers with the NFL, the league confirmed today.

“I know it’s time, and that’s OK. It is,” Favre said after the defeat. “Again, I hold no regrets, and I can’t think of too many players offhand that can walk away and say that. Individually and from a team standpoint, it was way more than I ever dreamed of.  I don’t know for me if it’s ever easy,” Favre said. “I’m sure throughout this year, the comment has been made that, ‘We’ll wait and see in August or September’ and that’s fine. It’s time. I’m OK with it.”

Brett Favre Being Fined NOT Suspended for Sexting Jenn Sterger

Could this be the real retirement we’ve been waiting for?  Yes.  I think so.  There is no way this guy could return to the NFL after this season.  He sucked at football and then his morals have been in question and still have not been cleared.