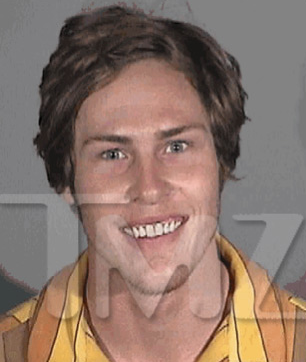 What’s with reality TV stars getting arrested like it’s nobody’s business?  Good grief.  I am sorry to say that the most recent Survivor winner, Judson Birza better known as Fabio has been arrested in Santa Monica.

Police saw Fabio riding a skateboard in the street, which is illegal and when they stopped Birza, they noticed he was acting like a freak, a high as hell one and arrested him.

Birza was also booked for an unrelated DUI warrant as well as a probation violation.  Who knew he was such a bad boy.  I knew he was a hippy.  But I didn’t think he was a douche bag.

OMG, you can see how high he is in that mugshot.  That is hilarious.  That smile, those eyes.  Trouble, trouble.  I would like to point out that at least he was only riding his skateboard high.  He could have been behind the wheel.  Props for that?