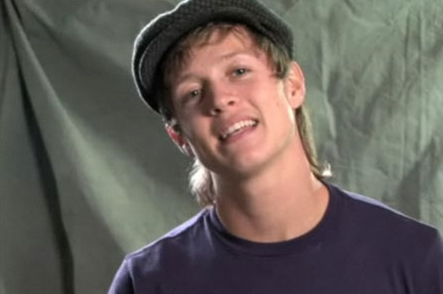 Former American Idol contestant, Alex Lambert decided to pull a cheap publicity stunt to get his name back in the headlines. Twitter is free and it acts like wildfire, some people like to abuse it.  Such is the case with Alex Lambert.

He started a series of Tweets,

“Ever since [starring in the Web reality series ‘If I Can Dream’] ended I’ve been kinda homeless! Sleepin’ on the street and behind buildings,” he said. ” I just want my fans to know that I’m not an ‘American Idol’ type person. I just want y’all to know the truth.”

“I have a choice to stay and pursue my career or go back to Texas and not do music! I’m usually a strong person, but I can’t take it anymore.”

“I’ve been goin to coffee shops and other stores so I can tweet to my snaf! Because to be honest! You guys are all I really have!  I’m a poor boy yall! Never had nothin in my life. please be greatful for everything you have. Because there’s people out there with nothing!”

“I just want my fans to know that I’m not an American Idol type person! There are many things I can’t share with yall because you’d probably  think I was a hooligan haha”

There are a lot more of those as well.  But the point is, Alex’s rep at 19 Entertainment has come forward with the truth telling EW,

He is absolutely “not homeless.  I don’t know where that came from.”

The rep said Lambert should have the financial means to pay for his housing. “He’s on a retainer, and he’s getting money every month. He’s working on demos. He’s with writers, he’s working on music.

What do you think?  Is Alex Lambert pathetic, desperate, or WHAT?

By the way…. tonight is the season premiere of American Idol 10!!