‘The Bachelor’ Brad Womack Has A Criminal Record (MUGSHOT) 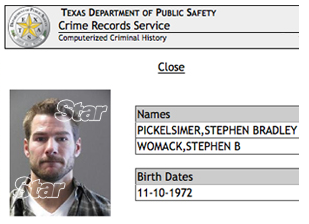 Oh look!  It’s another reality star with a mugshot and rap sheet past.  This time it’s none other than our second time around Bachelor, Brad Womack.  Or in his past life, Stephen Bradley Pickelsimer.  Yikes, I’d change my name too!

Brad tries to come across as a sweet southern boy on the show.  But, he’s got issues that we have all seen, hence the constant therapy… even on the show!  Anyhow, he’s been busted in Texas for  carrying a forged driver’s license and public intoxication. Plus he was a bad check writer to boot!  I’ll bet that’s his daddy’s fault.

‘The Bachelor’ Brad Womack Makes His Comeback – Do I Buy It?

The photo above was updated in November of 2009 to keep his record with the Texas Department of Public Safety up to date so they can monitor him.  Wow.  That’s intense.  It’s not like he killed somebody or robbed a bank!

Anyhow, there you go.  Another imperfect reality star.