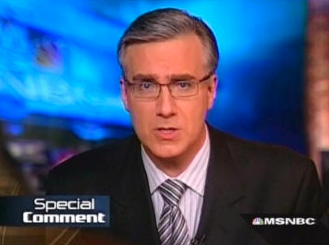 “MSNBC thanks Keith for his integral role in MSNBC’s success and we wish him well in his future endeavors.”

A spokesman said that Comcast’s acquisition of NBC Universal had nothing to do with the decision to let him go.

Back in November, Olbermann was suspended for two days for violating a network rule on political donations.

Wow.  That was kind of shocking….