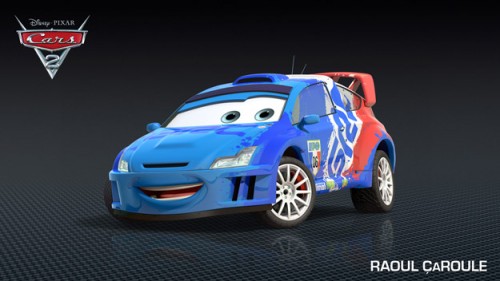 I loved the original Cars movie and I am pumped for the sequel!  Coming Soon got the exclusive first look at Raoul ÇaRoule from Cars 2.

‘Cars 2′ Trailers Have Arrived, You’re Going to Love It!

He’s totally cute!  Check out the specs on this newby:

Known as the “World’s Greatest Rally Car,” #6 Raoul ÇaRoule was born in Alsace, France. A restless soul, Raoul joined the famous ‘Cirque du Voiture’ French circus where he learned Gymkhana – a graceful, drift-filled motorsport that taught him pinpoint timing and an unparalleled ability to navigate tricky courses with ease. He’s the first car to ever win nine consecutive rallies. Raoul is confident he can use his rally experience to pull ahead of his fellow World Grand Prix racers during the three courses’ touchy dirt sections, especially with his fans in the stands waving banners that read: “ÇaRoule Ca-Rules!”