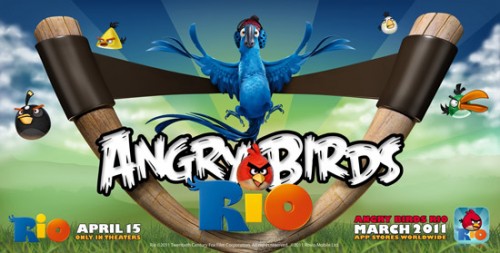 Are you an Angry Birds addict? I have admittedly spent way too much time on my iPhone going through level after level.  This is one of the most addicting games ever.

Well, for all of crazy addicts, we have something new to look forward to.

20th Century Fox and Rovio have announced they are teaming up for a Rio tie-in game, coming in March

“In partnering with Rovio, we are combining the world’s hottest application developer with one of the motion picture industry’s premier creative forces to introduce the millions of fans of ANGRY BIRDS to the exciting world of RIO,” said Mr. Levinsohn. “Our relationship with Rovio is another great example of Fox Digital Entertainment’s continuing work to extend our content to a variety of digital platforms.”

In ANGRY BIRDS RIO, the original Angry Birds are kidnapped and taken to the magical city of Rio, where they eventually escape their captors and set out to save their friends, Blu and Jewel – two rare macaws and the stars of the upcoming Fox motion picture, RIO. Like the incredibly-popular original edition, ANGRY BIRDS RIO will feature hours of gameplay, physics-based demolition challenges and loads of replay value – all with unique twists based on the highly-anticipated film.

ANGRY BIRDS RIO will launch with 45 dedicated levels and will regularly add new levels via app updates. The game will be available for download on smart phones and tablets worldwide.