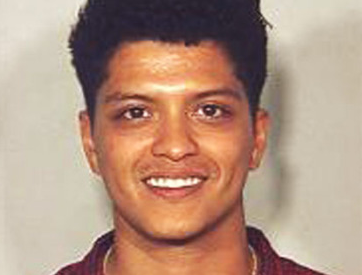 Bruno Mars (Peter Hernandez) has 7 Grammy nods, but that has a bit of a damper on it.  Only days before the show airs, he will be pleading guilty for felony drug possession.

In September, he was arrested at the Hard Rock Hotel in Las Vegas for having  2.6 grams of a substance believed to be cocaine on him.

When he appears before the judge on February 4th,  he will  enter his guilty plea and be fined $2,000, get a year of informal probation, 200 hours of community service and drug counseling.

Since this was his first offense, the charges will be expunged from his record, giving him a clean slate.