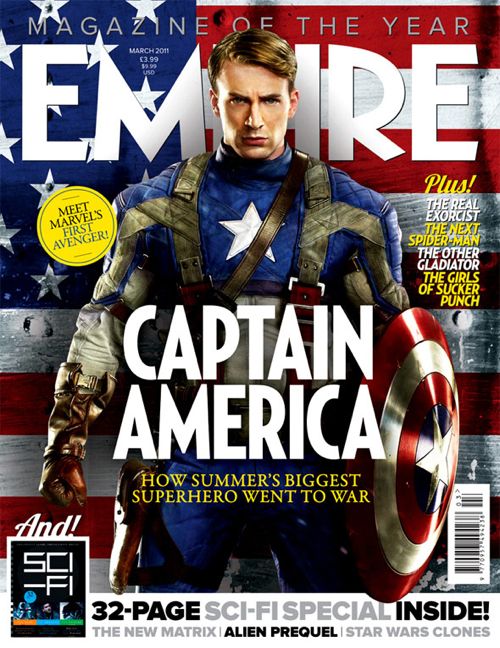 Empire Magazine is featuring Captain America on it’s March 2011 cover and if that doesn’t get you pumped, nothing will.  I love this cover.  It’s so bold and so um…. American!

Here are some deets from the mag:

“Scripts had been developed that took place half in World War Two, half in the modern day and none of those scripts were particularly successful because the costume ended up overshadowing the man,” says Marvel chief Kevin Feige. “So we finally said, ‘If we could make a Captain America movie any way we wanted to make it, how would we make it?’ Well, we’d set the entire movie in the past, in that period, with all of the Marvel trimmings. And so we made the fun, kick-ass Captain America movie we wanted to.”

“I’ve always loved Raiders and the tone that it had,” says director Joe Johnston. “It was period but didn’t feel like it was made in the period. It felt like a modern-day film about the period, which is what we’re doing on Captain America. It will not feel like a war movie. It’s funny where it needs to be and emotional where it needs to be and serious and full of action.”

And he’s not just an American hero, argues Evans. “I think he’s the ideal human,” says Evans. “Not just American. It’s what being a good person is. Steve’s managed to overcome all the shortcomings he’s had in life and he does what’s good and what he believes is right.”

This epic film hits theaters on July 22nd.  I still think a 4th of July release would be better.  But I know the holiday would put a damper on box office numbers.  Can’t wait!