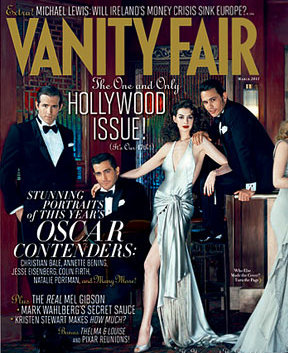 It’s time for the Hollywood Issue of Vanity Fair.  I always love this issue.  It’s so hot and the cover is always frame worthy.

For our 17th annual Hollywood Issue cover, Vanity Fair went back to the basics—no teenagers, no penguins, no (full-on) nudity, just the most exciting actors and actresses of the moment. Anchoring the front panel are Oscar co-hosts Anne Hathaway and James Franco (himself a best-actor nominee), along with Ryan Reynolds and Jake Gyllenhaal, two of the most versatile, likable (and, yes, good-looking) leading men in Hollywood.

The two inside panels feature 11 more stars, from newcomer best-actor/actress nominees Jesse Eisenberg and Jennifer Lawrence to Noomi Rapace, whose stunning performance in the original, Swedish version of The Girl with the Dragon Tattoo propelled her from Stockholm to Hollywood. Joining them are Anthony Mackie, Olivia Wilde, Mila Kunis, Joseph Gordon-Levitt, Andrew Garfield, Rashida Jones, Garrett Hedlund, and Robert Duvall. The cover was shot in Los Angeles and New York over the course of two days by photographer Norman Jean Roy, and, as evidenced by our behind-the-scenes video below, V.F.’s West Coast editor Krista Smith managed to nab nearly all of our cover subjects for sit-down interviews on set.

Check out the behind the scenes video below: