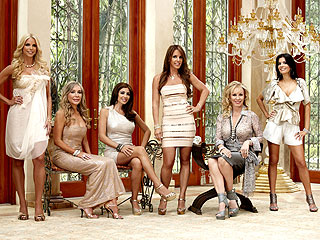 Lea Black has a 9-year-old son with her lawyer husband. A strong supporter of President Obama, the Texas-born Housewife is invested in her own charitable endeavors.

Larsa Pippen is married to basketball star Scottie Pippen and was known as the “Hottest NBA wife.” A mother of four, Pippen boasts that she’s successful at everything she does.

Marysol Patton is a Miami native who runs her own PR firm, the Patton Group. A divorcee, Patton is known for throwing bashes around town and loves to spend time with her mother, Elsa, who considers herself a “seer” and offers spiritual guidance people in town.

Alexia Echevarria is the executive editor of Venue magazine, where she covers fashion and celebrity culture. She lives on Miami Beach with her husband Herman and has two sons from a previous marriage.

Cristy Rice was recently divorced from NBA star Glen Rice. The show will follow her single life as she juggles business (she owns a clothing store) and being a single mom.

Adriana DeMoura-Sidi is fiery and flirtatious and … newly engaged. Her personality lands her in trouble and the subject of much gossip among the ladies.