‘The Bachelor’ Brad Womack is SO Full of It 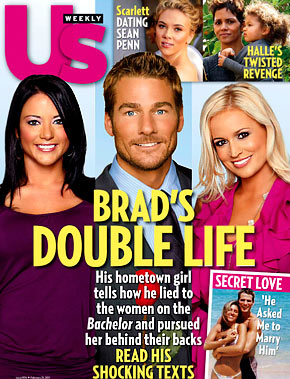 I haven’t pretended to like Brad Womack ever and I am not going to start now.  This guy is so pathetic and so full of BS, it’s nauseating.  I am actually ticked off at ABC from bringing him back.  What were they thinking?  This season of The Bachelor has been ruined by this moron.

The slime that is Brad was working hard at making love work in his “normal” life, just weeks before he took off to tape the show for the second time.

Brad’s ex-girlfriend, Laurel Kagay, who dated the schmuck on and off for eight years told Us Weekly just what kind of guy he really is.

The Next Bachelor: David Good

Brad proposed to her multiple times in their relationship and even popped the question one more time right before he left for taping.

“Even when we weren’t together, he would say how much he loved me and was going to marry me,” she tells Us.

Even when Brad left and was taping the show, he was emailing Laurel.  What?!

So now she is trying to give a fair warning to whomever it is that Brad has already popped the question to on the show.

SO what do you think about all of this?  Were you a fan of Brad’s?  Are you still?  Can you believe his nerve?  Man, I wish ABC would get their act together and do a better job.  This is such a waste of a season.  I am a huge fan of the show, but this season is purely irritating.  Yeah, I can’t stop watching it though… Ha!