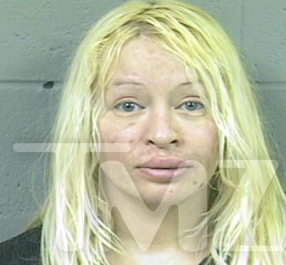 Former Smashing Pumpkins bassist, D’arcy Wretzky was arrested on Tuesday and will remain behind bars in Michigan until she is released on Valentine’s Day.

Her ex boyfriend, Jeff Khoshaba told TMZ that back in 2009 her horses somehow got out of their enclosures and took off, the neighbors called the cops.  She ended up being ticketed  for her “Animals Running at Large.”

D’arcy never paid the ticket and failed to show up for four consecutive court appearances.  So she was arrested.  The worst part? Having to look at her ugly mug.  Seriously.  Yikes.