Vanessa Hudgens Strips Down and Gets Wet For Details – PHOTOS, Video 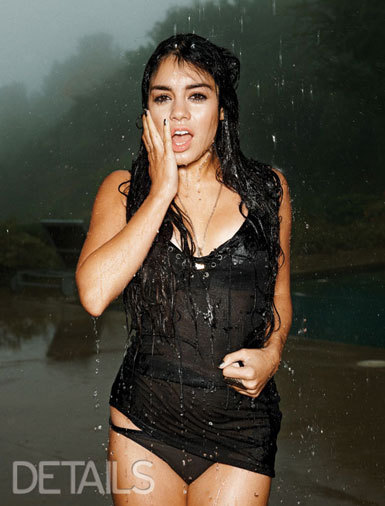 Vanessa Hudgens and Zac Efron still seem to be working things out.  Their relationship doesn’t seem to want to go away.  And when Zac has a look at the latest issue of Details magazine, he’s really going to want to rekindle the flame.

Vanessa is nothing short of a sexy vixen for this sexy spread. Opting for black, slinky lingerie and pantless poses, Vanessa brings the heat.

My favorite part of the interview is when she talks about plugging herself to Quentin Tarantino:

“After the Oscars we were at Madonna’s party. Quentin Tarantino was there, and I was talking to him for a while, probably after a few drinks, and I told him, ‘We’ve gotta do something together.’ And he was like, ‘I would love to. That would be really great.’ So it’s been put out there,” Hudgens says. “Slowly, I’ve gained balls. I used to be very shy.”

Despite several overtures, Hudgens refuses to share a cookie; she craves a favorite California Cabernet instead, but she’ll have to seek it elsewhere. “Nothing has happened with Tarantino yet,” she says. “But I definitely tried to plant my seed. Hopefully he won’t look back and think, ‘Oh my God. That crazy b*tch.‘ “

Ha!   I love it and I seriously doubt that was what was going through his mind.  You can check out the full interview in the latest issue of Details.