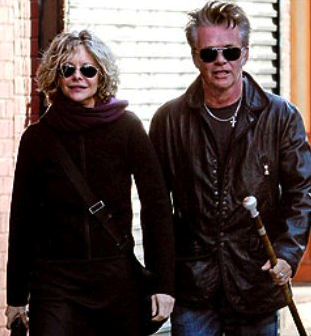 I know.  It’s crazy right?  BUT, Meg Ryan and John Mellencamp have only been dating for three months now and she’s sporting a ring on that infamous RING finger.

The naughty couple were snapped up in Toronto, Canada after one of John’s gigs up there.  The bling was captured and there is no going back now.

Does this confirm that they are in fact engaged?  No.  Of course not.  But if you were in the spotlight like these two, and your relationship was rather frowned upon, would you openly wear a ring on that finger if it had no meaning at all?  That’s just asking for these reports to start popping up everywhere.

You can check out the incriminating pics here.  Then tell me what you think.