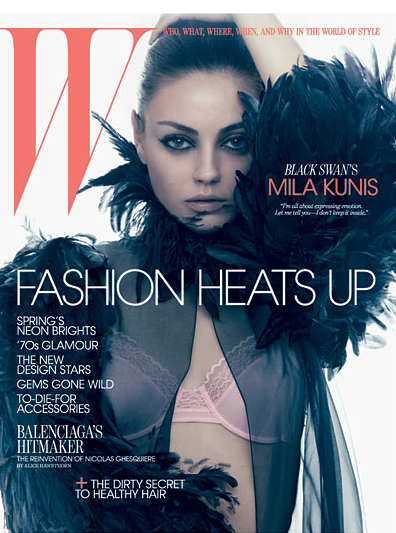 Black Swan star, Mila Kunis is covering the latest issue of W Magazine and she looks amazing in this spread.  The photos are simply breathtaking.

Mila opened up about her role in the award winning, Oscar nominated film,

Lynn Hirschberg: In Black Swan, you play the wild-child devil girl. You’re both seductive and scary. Had you danced before you took the part?
Mila Kunis: I had never danced in my life. I trained for four months, seven days a week, five hours a day. I had one day off on my birthday. I lost 20 pounds. I tore a ligament. I dislocated my shoulder. I have two scars on my back. And it was worth every minute.

But I will never dance again. I’m a strong believer in mind over matter, but I didn’t fully understand what that meant until this production. I was like, Well—I wear heels; I can do this. I was wrong: Christian Louboutins are uncomfortable, but I screamed the first time I put on a pointe shoe.

You have previously been known for comedy. Do you think it’s difficult for women to be considered both beautiful and funny in Hollywood?
I was never raised to think that I was pretty. It’s not that I was raised to think I was unattractive, but it was just never something that was pointed out to me by my family. They would point out personality traits—“Our daughter is really quirky”—versus what I look like, because inevitably, looks go, so it makes no difference.

You can read the entire article over at W.

For now, you can check out all the photos from the spread below as well as her screen test.  Enjoy: