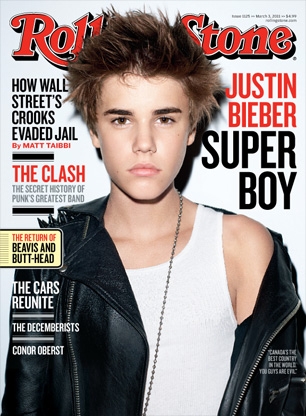 Justin Bieber is everywhere at all times these days.  And now he’s on your coffee table this month, covering the current issue of Rolling Stone magazine.   He talks sex, politics, and movies:

“I don’t think you should have sex with anyone unless you love them,” Bieber says. When asked if he believes in abstinence until marriage, Bieber – who is reportedly dating fellow teen star Selena Gomez – seems wary: “I think you should just wait for the person you’re…in love with.”

Side note:  Justin’s screensaver is a snap of him and Selena Gomez….

Justin Bieber and Andy Samberg Do ‘The Roommate’ SNL – VIDEO

He’s a Canadian and never plans on changing that:

“You guys are evil,” he says with a laugh. “Canada’s the best country in the world. We go to the doctor and we don’t need to worry about paying him, but here, your whole life, you’re broke because of medical bills. My bodyguard’s baby was premature, and now he has to pay for it. In Canada, if your baby’s premature, he stays in the hospital as long as he needs to, and then you go home.”

Being only 16 still, Justin has a couple more years to decided on how he will vote:

“I’m not sure about the parties,” Bieber says. “But whatever they have in Korea, that’s bad.” He does have a solid opinion on abortion. “I really don’t believe in abortion,” Bieber says. “It’s like killing a baby?” How about in cases of rape? “Um. Well, I think that’s really sad, but everything happens for a reason. I guess I haven’t been in that position, so I wouldn’t be able to judge that.”

Yes, Bieber sounds like a pretty level headed kid.  His success is huge, the head seems to be staying pretty level.