Anne Hathaway and James Franco HATE Each Other 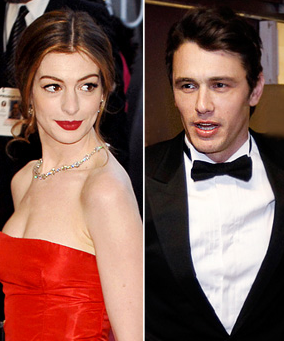 Thanks to hosting the 2011 Oscars together, James Franco and Anne Hathaway are now more like mortal enemies.

Us Weekly reports that they grew to “hate each other” as they rehearsed for the big night.

“She had to provide all the energy — he was just phoning it in,” says a second insider. (“James seemed in his own little world,” during the Oscar telecast, says another source. “Producers were pissed.”)

“He went immediately back to NYC because he was pissed about how the show went,” adds a third source.

Both of their reps are trying to sugarcoat the entire thing of course, they don’t want to be viewed like that.  But hello, anyone who watched the show saw how over the top Anne had to be in order to compensate for James who was completely stoned and pretty much a complete embarrassment.  There is a time and place for everything and he screwed it up royally.

So who would you like to see host next year’s Oscars?  Hugh Jackman?  Billy Crystal?  Or is there a new name you’d like to throw in the ring?