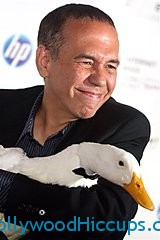 Gilbert Gottfried was already one of my least favorite humans.  Then when he made tasteless jokes about Japan, that put me over the edge.  So I am more than happy to announce that he has been fired by Aflac… he is that annoying duck voice on there and since 2000.

“Gilbert’s recent comments about the crisis in Japan were lacking in humor and certainly do not represent the thoughts and feelings of anyone at Aflac … Aflac will immediately set plans in motion to conduct a nationwide casting call to find a new voice of the iconic Aflac Duck.”