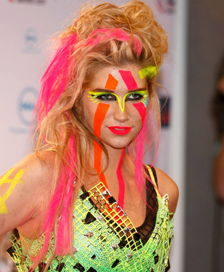 Ke$ha is out of control. She seems to think that she is the new, female version of Ozzy Osbourne.  During a concert in Sydney, Australia, she covered herself in sheep’s blood that she squeezed out of a “heart” that looked legit.  I am hoping that it was fake, but it sure did it’s stomach turning job.

I don’t care if the song is called, Cannibal.  That’s just nasty. And so completely wrong.

Are you ill now? Sorry.