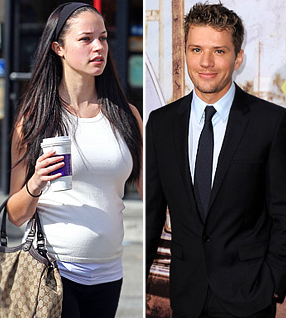 Ryan Phillippe is currently dating Amanda Seyfried, but it looks like he’s going to be splitting his time with her a little more in the near future.

His ex, pregnant model-actress Alexis Knapp, is pregnant and saying it’s his.  Sources revealed to Us Weekly,

“She’s in the second trimester.  She has been telling people he is the father.  Ryan doesn’t know if he is the dad.  If he is, he will take full responsibility for the child.  He and Alexis were actually together for a while…It was pretty serious.  He’s a good guy.  He loves being a dad and takes being a dad really seriously.”

Ryan has two kids with Reese Witherspoon, Ava, 11, and Deacon, 7.  So I am sure he would never dodge his responsibilities.  And as far as whether or not he’s really this baby daddy, I think Alexis has a pretty level head and wouldn’t be making the claim if she was certain.

I guess we will wait for a statement from Ryan. Then we will give out the congrats.  I wonder how Amanda is feeling about all this?